Love Letter: Batman is a game of risk, deduction, and luck for 2–4 players based on the original Love Letter game by Seiji Kanai. The deck consists mostly of criminals, with Joker being the most valuable card at #8, Harley Quinn at #7, and so on, with Robin showing up at #4 and Batman as #1, which is the guard in the original Love Letter. Your goal is either to hold — that is, have captured — the highest valued card at the end of the round or to be the final player active in the round.

From a deck with only sixteen cards, each player starts with only one card in hand; one card is removed from play. On a turn, you draw one card, and play one card, using the power on that card to expose others and (possibly) knock them out of the round. If you use Batman's ability to KO someone (other than Robin), you score one point, with points being tracked via Batsignal tokens. If you're the final player active in the round or the player with the highest card when the deck runs out, then you score a point.

The game ends following the round in which someone has seven or more points, and the player with the most points wins. 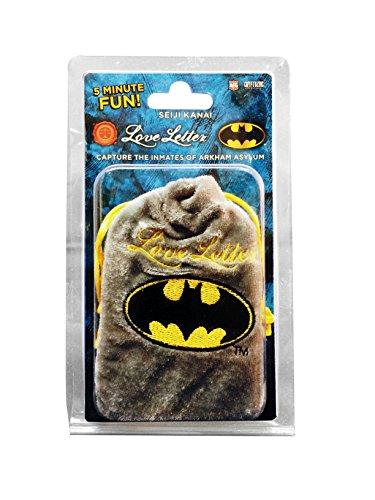